Wasp is a term that covers most flying, stinging insects that are not bees. We won’t comment here on the few ants that fly and sting as they are rare and easier to differentiate.

Do You Have Bees? Or Are They Wasps?

Bees swarm to build their hive. Wasps swarm in defense of an existing nest or away from the nest when gathering food. If you see a swarm hanging from a branch or rafter, they are most likely bees in need of rehoming. If you see a wasp nest, contact us for immediate removal. 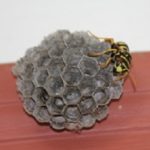 1. Solitary, parasitic wasps, paper wasps, and some others build umbrella nests. They hang from rafters, eaves, and branches.

Looking up you will see the hexagonal cells, or combs, visible from underneath. The exterior looks like gray paper. 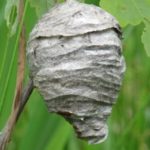 They have a single entrance hole in the bottom and also appear to be made of gray paper. 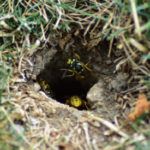 You can identify them by an entry with yellow jackets going in and out. Some parasitic wasps inhabit underground nests of other insects and animals.

To begin, a queen gathers fibrous material and mixes it with her saliva. The queen scrapes wood from homes, trees, fences, and even cardboard. No matter which type, the nest begins as a hanging node which the queen builds out into cells to lay eggs. 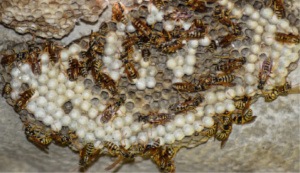 Future generations take over building the nest to fit the size of the colony. At the height of the season, it contains thousands of wasps. They will aggressively sting and bite to defend their home.

At the end of the summer only fertilized queens survive, overwintering outside of the nest. The nest is delicate at this point. It will break down before spring. Some tropical wasps survive the winter, building multi-year nests. In the U.S., only southern yellow jackets can do so.

Wasp nest removal should be done by a pest control professional.

Croach® technicians are trained to deal with these aggressive insects. After treatment, umbrella nests and teardrop nests are knocked down and removed.

Ground nests will remain empty for the rest of the season and deteriorate naturally. You will want to seal them up before the next spring. Wasps are notorious for returning to the same spots year after year.

Your technician will also advise you on actions to make your yard less appealing. Contact Croach® to get rid of your wasp nest. 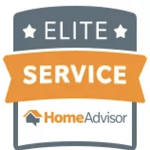