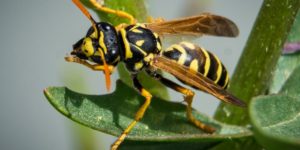 Most wasps we encounter are not native to North America but have found their way here as invasive species.

Wasps are beneficial in the ecosystem but damage property and can be dangerous to people. A wasp sting, for instance, is painful. And they can sting multiple times.

But more concerning are the pheromones some wasps release to attract others to join in the attack. This species commonly build a hidden wasps nest on manmade structures such as roof eaves, sheds, and decks or off the ground in bushes or trees.

The paper wasp is a social species that builds a large umbrella-style nest. It looks like its made of paper, thus their name. Unlike a hornets nest, it is open on the bottom. You can see the combs from below (though we don’t recommend you take a peek when the hive is active).

Paper wasps look similar to yellow jackets. They damage plants and homes as they build their nest and will defend their territory aggressively. Twenty-two species of Polistes paper wasps have been identified in North America, including Western, Red Paper, and European.

Named for the material they use to build their nests, common types of mud wasps include:

Mud Daubers
Up to an inch in length, they have thinner than usual needle-like waists. They are black with yellow marks and orange wings. They build small mud nests, feed primarily on spiders, are solitary, and one of the least aggressive wasp species.

Potter Wasps
Black with yellow stripes, they build small pot-style nests in branches and the eaves overhanging the edge of your roof.

Pollen Wasps
Often mistaken for yellow jackets, these solitary wasps build nests in the ground. They are great pollinators but will sting to protect their nest.

Other Types of Wasps

No matter which of the types of wasps you have, Croach® pest control technicians are experienced and thorough in both the removal process and ongoing prevention.

One of the first steps is identification to determine whether we’re dealing with bee removal or getting rid of wasps.