Stink bug control service is critical in Beaverton in spring and fall. Croach keeps stink bugs, and their odor, out of your home and has for a decade. 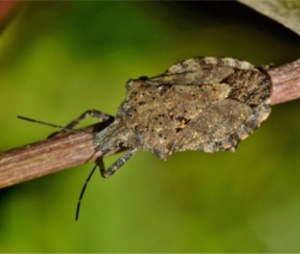 Over the last several years, Beaverton has seen major infestations of stink bugs from March to May, and again around September.

Their presence continues through summer in smaller, but still noticeable, numbers. Croach keeps the bugs and their associated smell out of your home.

In Oregon, we are known for our trees and lush, green environment. Unfortunately, both draw this invasive pest, causing them to gather on and hibernate in your home.

What is a Stink Bug?

Some varieties of stink bug are native to the area. However, the most prevalent is the invasive Brown Marmorated Stink Bug, which migrated from Asia in shipping containers.

They are small flying insects, and you can identify them by their shield shape and brown marbled coloration. They feed on vegetation, including fruits, vegetables, and leaves and are attracted by many ornamental trees. 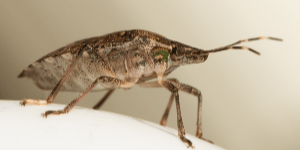 The most distinct feature of the stink bug is their defense. When scared, injured, or killed they release a pungent odor from pores in the underside of their abdomen.

The scent that gives them their name makes them unappetizing to birds and lizards and is distinctly unpleasant to humans.

These pests seek shelter in the fall, entering through cracks, under siding, windows and doors, and any other entrance they can find. They often seek out the attic and hibernate over winter. Due to the warmth inside, some may wake up early and fly around the lights in your house.

With their small size, thousands of stink bugs can live in one house. Which is why we often see so many on our homes during their migration periods. They are attempting to enter the home or resting up before searching for food.

As a flying insect, the stink bug is not a part of the standard Croach service. Due to their invasive nature and heavy numbers in the Beaverton area, Croach adopted the policy of inspecting and retreating, when necessary, for heavy stink bug invasions. 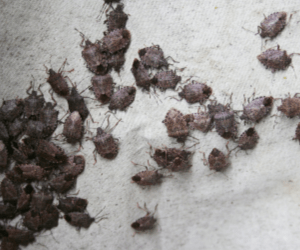 Our products repel stink bugs, and other insects, and eliminate pests that land on them.

Unfortunately, the ones that fly through open windows and doors miss the treatment.

Additionally, in large numbers – as Beaverton sees – the amount of bugs on your siding quickly wears away the residual effect of our treatment. Requiring a new application to get rid of stink bugs but also spiders, ants, wasps, and other pests.

Stink bugs are fragile, especially during the spring, making glue boards another effective control method. If you are calling for a stink bug problem, let us know if you want some extra boards placed to help with pests that get inside.

The Premium Beaverton, OR Pest Solution

The best way to get rid of stink bugs and keep them out of your home, eliminating their spring exodus and presence on your walls, is to seal the openings they use to enter your home. Pairing exclusion with regular Croach service protects your home and family from annoying bugs and their stench.

Contact Croach for an excellent customer experience and your stink bug pest control service needs in Beaverton, OR.