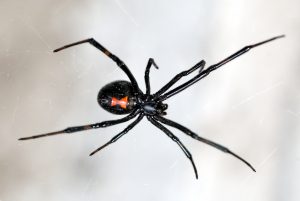 The black widow spider is one of three spider species in North America with a medically significant bite, the other two being the Brown Recluse and Chilean Recluse.

The black widow spider is generally shy and bites when threatened or pressed against the skin. Unlike the others, the bite is not necrotic but is more venomous. It is one of the most venomous creatures in America.

These spiders can live up to three years. Females create as many as nine sacs a summer, containing as many as 750 eggs each. Generally, one to twelve survive, due to cannibalism amongst the young.

Spider Control Near You

Get a Croach® spider exterminator near: 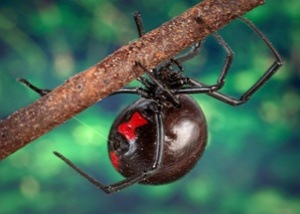 Females are generally shiny black with a red hourglass on the underside of their abdomen. They may have red stripes and dots instead.

Males are dark brown to black with red, yellow, or white dots and stripes on the back. Some species are dark brown and may have white or yellow markings on the underside. These often have red legs.

Where the Black Widow Spider Lives

Black widow spiders prefer warm climates. They have been found throughout the United States. They prefer to live near the ground, choosing small holes and cracks to build their webs. Often found in the basement of buildings. Some live in small, abandoned animal burrows.

They create webs of irregular, sticky, tangled silk. The web catches insects, which the black widow spider wraps up, liquefies and devours. Egg sacs on the web are teardrop-shaped. 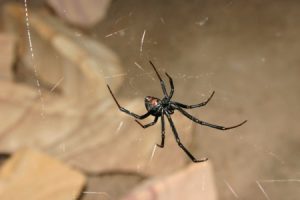 Black widow spiders are nocturnal. Males travel to find females. Females stay near their web, defending it and attacking when food lands. When threatened they use an escape string and flee. If running is impossible they most often play dead, only biting when pressed to skin or eggs are threatened.

These spiders are known for sexual cannibalism where the female eats the male after mating. This only reliably happens in captivity. In nature, males flee to avoid being killed. A well-fed female is less likely to attack her mate. Males seek females that have eaten recently, which they learn from a scent in the web silk.

Males and young spiders are not dangerous to humans.

The severity of a female bite depends on age and physical condition of the victim and how much venom, if any, the spider injects. Dry or low venom bites have little to no pain and may leave fang marks.

Children and the elderly who are bitten need immediate medical attention. Anyone else experiencing more than localized pain should seek medical attention. If in doubt, see your doctor. Transport children by EMTs to monitor health in transit.