Common and Dangerous Spider Species
in the Croach® Service Area

Various spider species live within the Croach® service area. The following list is of the most common and most dangerous of them. There are so many spider species that listing them all would be impossible.

Any spider species can damage the value of your home if not professionally treated. The severity of bites vary. Children, the elderly, and people with allergies, illnesses, or compromised immune systems should seek immediate medical attention for any bite. 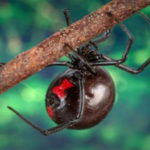 Description: The black widow is one of three spider species in North America with a medically significant bite. Females create up to nine egg sacs a summer with up to 750 eggs each.

Habitat: Prefer warm areas but can survive anywhere. Build webs in holes and animal burrows near the ground.

Behavior: Nocturnal, males travel to find mates. Known for the female killing their mate, which occurs rarely in nature but consistently in captivity.

Children should be transported to the hospital by EMTs. Elderly bite victims and anyone experiencing more than local pain should seek medical attention. Regardless of severity, anyone bitten may consider seeing a doctor as a precaution. 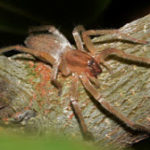 Description: Dangerous spiders with a necrotic bite. Good at living through droughts and lack of food.

Identification: The brown recluse has six eyes instead of eight, and a violin-shaped mark on the back at adulthood. They have no spines on their legs but may have short hairs.

Web: Asymmetrical, sticky, white or gray, in out of the way corners.

Behavior: Rarely aggressive unless stepped or rolled on. Normally stands with legs radially extended. Draws into a defensive posture when threatened.

Bite and Treatment: Dangerous to everyone, especially children, the elderly, and the sick. Can cause necrotizing ulcers, deep scars, systemic blood issues, and even death. Seek medical attention for brown recluse bites. 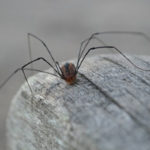 Description: One of three spiders known as Daddy Longlegs, or in this case, Granddaddy Longlegs. Very timid spider of the cobweb family associated with many horror stories.

Identification: Small, thin and fragile bodies with a spherical abdomen, bodies less than half an inch and legs up to two inches long. Gray, brown, or clear, with banding on the legs.

Web: Cobweb-like webs in corners and out of the way places. The web is not sticky.

Behavior: Known to hunt other, highly venomous spiders. Trap other insects by throwing silk on them. Vibrate when threatened, shaking their own web, and when hunting other spiders in their webs.

Bite and Treatment: Cellar spiders are rumored to have a highly venomous bite, but fangs that cannot penetrate human skin. Recent studies show they can bite, but rarely do, and the bite causes a slight sting that fades quickly. It can usually be treated by washing the area and applying ice if necessary.

Description: Ancient arachnids that are not actually spiders, which they are often misidentified as.

Identification: Long legs like a spider, distinguished by a round, fused body, and only one pair of eyes.

Web: None, they have no silk glands.

Behavior: Harvestmen can swallow solid chunks, unlike spiders. They are mostly omnivorous and hunt or scavenge prey.

Bite and Treatment: Contrary to rumors, they do not have venom glands, and what are mistaken for fangs are tiny pinchers that will not pierce human skin. 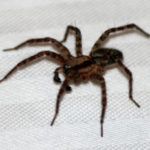 Description: Large spider introduced to the Northwest from Europe.

Identification: Dark brown with three lighter spots on each side. Up to ¾ of an inch long with legs up to 3 inches.

Habitat: Pacific Northwest, usually in dark places as they prefer caves in nature.

Behavior: While terrifying to look at they are shy and prefer to flee instead of bite when encountering humans.

Bite and Treatment: Mild bite not known as a hazard to people or pets. Wash and ice bite.

Description: Common looking spider. Bites when pressed to the skin. More aggressive than most due to poor eyesight and difficulty catching prey.

Identification: The hobo spider is brown with dark brown markings on the head. Slightly smaller than most species. Other identifying marks usually need magnification to identify.

Habitat: Fields, train tracks, ground floors, and basements. Poor climbers, if they are above the first floor or on a wall it is probably not a hobo spider.

Web: Funnel-shaped, not sticky, wide end between solid objects, and a narrow end that often leads to an escape route.

Behavior: Skittish in general, males travel during the day to find mates. Around their web, they become aggressive due to the need for food and protection of eggs.

Bite and Treatment: Infection can cause blisters or worse, and have been associated with mental and systemic problems. While home treatment may work, Croach® recommends medical attention, to be safe, especially for children, the elderly, and people suffering from illness. 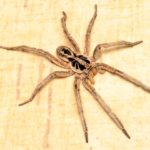 Identification: Brown that matches the environment, vary greatly in size. They have two large eyes that reflect light shined on them.

Habitat: Worldwide. Burrows and hollows will move inside during cold weather.

Behavior: Wolf spiders hunt other insects, dropping on and attacking them. The female carries her egg sac on the abdomen with the rear kept up to avoid damage. After hatching, the young live on the mother for several weeks. They do not usually bite unless continuously provoked.

Bite and Treatment: Mild bites that cause pain, itching, and swelling. Can generally be treated by washing and icing the affected area. 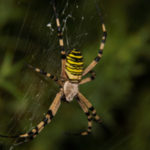 Description: Spider species common to North America that consumes the center of its web every night.

Identification: Can range greatly in size, has a distinctive yellow and black pattern on the abdomen and legs, and a silver thorax.

Habitat: All over, prefers gardens, high foliage, and eaves of homes.

Web: Orb web, what most think of as a traditional web, with a very tight center. Sticky silk. Built out of the way to avoid wind and weather.

Behavior: One of a few spiders active during the day. They stay in the middle of their web, pointed down, and wait for prey. Not aggressive unless placed against the skin. They consume the middle of the web each night and spin it again.

Bite and Treatment: Venom of the bite is about the same as a bee sting, with localized pain, redness, and swelling. It can normally be treated with cold and by washing the area.

Description: Aggressive, common spider species. They lay eggs and cover them with silk.

Identification: The yellow sac is under a quarter-inch to less than half an inch. Yellow, tan, pale green, or light brown with a brown heart stripe down the back. Long legs – the front pair is longer still – covered in stiff black hairs. Long sharp fangs.

Habitat: All over, preferring exterior when warm, moving inside for fall and winter.

Web: None, spin sleeping sacs in out of the way places in foliage, high on walls, or behind pictures.

Behavior: Territorial, preferring dark and high places. Defend egg sacs, commonly encounter humans and have been known to bite for little to no reason.

Bite and Treatment: Painful as a wasp bite, burns and can develop blisters, rash, and kill the tissue. Necrosis is limited and heals in days. It can cause systemic symptoms such as nausea, muscle cramps, and fever. Seek medical attention if bitten.

No matter what kind of spider species you have, Croach® is here to help.

Related Articles:
How to Get Rid of Spiders
Fun Spider Facts
How Far Would you go to Rid your House of a Spider?
Spider Pest Control Season – Do You have Arachnophobia?