Around humans, however, hornets become threatening pests. They damage homes, possessions, gardens, and people. They do not make good neighbors.

Wasp Removal Services Near You

Get a Croach® pest exterminator near:

Hornets are aggressive when they feel threatened. They are protective of their nest and of food (including yours when they have targeted it as their own).

Any wasp sting is painful. Hornets, in particular, inject a pheromone to alert others nearby to attack as well. A nest can contain 700 or more individuals, each capable of stinging and biting multiple times.

Another chemical in the hornet’s sting signals your body to feel intensified pain. A single sting produces pain and swelling that can persist for several days. Seek medical attention in case of an allergic reaction. Stings become dangerous to humans at about ten stings per pound, whether an allergic reaction occurs or not.

Look Up to Spot a Hornet’s Nest 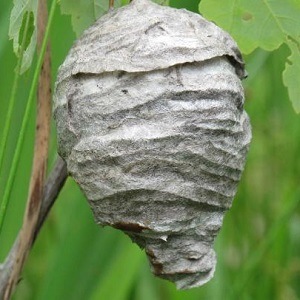 Their nests are usually unassuming and challenging to see. They may be found high in trees, inside attics, or hanging from eaves. They grow larger through the season, reaching the size of a basketball. A hornet nest looks like a paper mache teardrop with a single hole at the bottom.

In urban areas, these wasps collect garbage and other non-natural nest materials. They will scrape wood from the sides of homes and fences, and obtain other fibrous materials to do the job.

In nature, hornets gather wood from trees and plant material to build their wasp nests.

The Baldfaced Hornet is black and white and commonly considered a hornet species, but is actually in the family of Yellow Jackets.

The European Hornet, also known as the Giant Hornet, is the only true hornet variety in North America. It is not black and white; instead, it is similar in appearance to yellow jackets (yellow and brown). 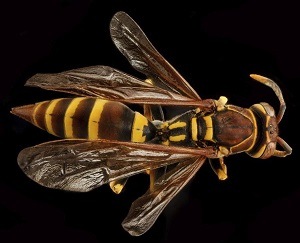 They have wider heads than other types of wasps, and the head is red-orange and brown in coloration. The rest of the body is yellow and brown. They have the same thin waists of wasps, but shorter, with rounded abdomens.

They are much larger than standard wasps, sometimes reaching more than two inches. Hornets are also the only wasp that flies at night.

The Life Cycle of a Hornet 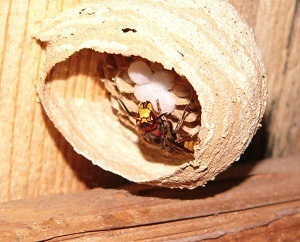 The queen starts by building a small nest and lays eggs. Once the workers hatch, they enter a larval stage for about eight days.

The queen and other worker bees feed them. Then they seal their cell, which looks like a honeycomb, and spend two weeks as a pupa.

In spring, the new queens emerge and begin the circle of life again.

Hornets prefer to build nests high above the ground, hidden in vegetation. Therefore, we suggest keeping trees and landscaping well-trimmed, thinned, and open.

Your Croach® pest control technician can advise you on how to get rid of wasps and other exclusion steps to make your home less appealing to hornets.

Regular Services
Ongoing pest management is in your best interest for the health and safety of your home, family, and pets. We will fortify a protective barrier around the outside of your property and apply exclusion methods as needed. Your technician uses environmentally-friendly products whenever possible.

Request a free inspection and begin services for treatment, control, and removal of hornet nests on your property or inside your home.