Get Rid of Wasps in Kennewick, WA

How to Get Rid of Wasps in Kennewick

"The banks and river were filled with salmon, the water crystal clear, and the sunlight glistened throughout the river country," noted famed explorers Lewis and Clark as they passed through the area now known as Kennewick, Washington.

Today, it is easy to see why they were so mesmerized by the beauty, and be equally taken in.

Located along the banks of the Columbia River, and surrounded by apple and cherry orchards, Kennewick is a stunning place to live, work, and visit.

Wasps are among the most feared insects we encounter, and for good reason.

The Problems with Wasps in Kennewick, Washington

They can nest by the hundreds in your eaves and rafters and will sting you just for the unforgivable offense of walking by. And unlike bees (who take the rap for 90% of wasp stings) they can sting you repeatedly. If you have ever had a wasp infestation or tried to get rid of wasps, it doesn't take long to understand why they have gained their notorious reputation.

Types of Wasps in Kennewick, Washington

The most common types of wasps in Kennewick, Washington are the paper wasp, hornets, and yellow jacket according to the Washington State Department of Health.

Paper wasps are about an inch long and are black or brown with yellow spots. Their nests are made from plant and wood fiber mixed with the wasps' saliva to form a paper-like material. They build the nests under any horizontal surface such as tree branches, eaves, and the beams that support attics, garages, sheds, and other structures. Paper wasps are social wasps and live in colonies. These wasps are easily disturbed by sound or vibration, are aggressive and territorial, and will attack if they feel threatened. Their stings are very painful and can cause a severe reaction in some individuals.

There are several types of yellow jackets in Kennewick, including the German yellow jacket. This species builds complex hives in the wall cavities and ceilings of homes and other structures. They are usually discovered when the colony's workers have chewed through the drywall and have made it into living quarters. Other species create hives underground. Continued activity causes the burrows to enlarge and will often collapse if stepped on, resulting in wasps swarming the bystander.

Yellow jackets are aggressive and unpredictable. Their stings are painful and because they can carry anaerobic bacteria on their stingers, in some cases can even be deadly.

Hornets are a specific type of wasp and make paper nests the same way paper wasps do. These nests can become quite big in just one season, sometimes as big as a basketball! While they are not considered aggressive, they do sting when they feel threatened.

Recently specimens of the Asian giant hornet also dubbed the "murder hornet", have been sighted in the Pacific Northwest. While it is the world's largest species of hornet, it is not generally a menace to humans.

However, Asian giant hornets pose a genuine threat to honeybees.

Just a few murder hornets can devastate a bee colony in a matter of hours. The Asian giant hornets kill bees by decapitation. Then they confiscate the hive, and use the bee larvae (brood) as food for their wasp young.

If a Croach® technician spots Asian giant hornets or evidence of a hive attack, they will report promptly to Washington State Department of Agriculture.

Why is Getting Rid of Wasps in Kennewick So Difficult?

You may have noticed the increased number of wasps in Kennewick, Pasco, Richland, Grandview, and surrounding areas. The is caused by warmer weather which means even as you remove a hive, another will soon develop as the insects seek shade and shelter.

Getting rid of wasps is tricky, and more importantly it is highly risky as they resist any efforts to kill them by stinging those who attempt to do so. It is also difficult to get rid of wasps with concealed nests in walls, attics, and other areas inside structures because common insecticide solutions either do not reach the area safely or are not approved (or safe) for indoor use.

When you discover your Kennewick, Washington home is infested with more aggressive wasps, it is important to keep children and pets out of harm's way until the hive has been removed or exterminated.

Because of their aggressive nature, it is never advisable to remove wasps nests yourself. If you locate a nest, call a pest control expert such as Croach®. 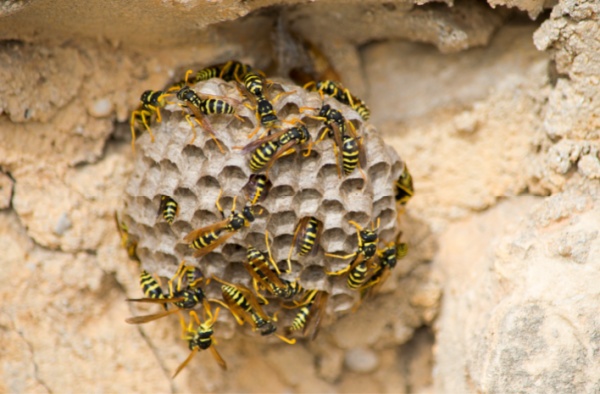 How to Treat Wasp Stings

Localized swelling and pain are typical reactions to wasp stings. In most people symptoms gradually disappear. Treatment generally consists of:

A small percentage of the U.S. population develops hypersensitivity or an allergic reaction to wasp venom following repeated stings. Reactions may be mild to severe and can involve difficulty in breathing, dizziness, nausea, and the development of hives. These symptoms may require immediate medical attention from a physician. Learn what to do if you are stung by an Asian giant hornet.

Like other insects and creatures, wasps are attracted to and build their wasps nests in places that provide their essential necessities - food, water, and shelter. To prevent wasps from making your home their home, try these simple wasp prevention tips.

Many D-I-Y products found in home improvement stores to kill wasps are ineffective and unsafe when used indoors or in a manner not prescribed by the manufacturer. Even if you can chase the wasps away for a time, they are likely to re-colonize in the same location soon or the following summer. Additionally, since wasps eat other insects, their presence may indicate other infestations. This is why ongoing and professional treatment is so important and valuable to control all pests, and why a one-time extermination approach worsens the problem. Croach® uses a proactive, safe, and affordable approach.

A professional pest management plan, such as offered by Croach® considers many aspects of pest control and eradication of wasps including:

The professional technicians at Croach® use pest control and prevention techniques rather than a one-time extermination approach. This curbs wasp populations and keeps them from re-invading your home. Croach® is a top-ten ranked pest control company with verified reviews.

Get Rid of Wasps!